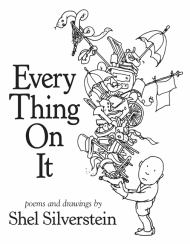 Every Thing on It

The beloved creator of Where the Sidewalk Ends lives on in a new collection of never-before-published poems.

Shel Silverstein was aware that his legacy was his poetry. Appropriately, this collection of posthumously published poems – 145 in all – is framed by two verses entitled "Years from Now," in which Silverstein pictures a child browsing the poems as he "somewhere from some far-off place" smiles, and "When I Am Gone," where he shares his worry about who will write and draw for the child and encourages, "maybe YOU!" In between is the free-for-all that made Silverstein so famous.

The poems range from gross, clever, and ridiculous, to hilarious and thoughtful. Children will gleefully squeal ewww over "Betty's Spaghetti," or "Transparent Tim" who ate a . . . well, you read it and see. They will laugh over the "Stubbornness" of funky donkey and spunky monkey or the idea of "A Car with Legs." In "Wall Marks," the narrator wonders why his mom gets teary-eyed over scratches indicating his growth; it will leave young readers and their parents in identical states. Some poems are just heart-breakers, such as "Happy Birthday," where the birthday boy asks, "So what if nobody came?" Most poems are accompanied by Silverstein's signature pen-and-ink illustrations; often the cartoon is essential to understanding the poem such as "My Zoootch," wherein the would-be sleeper claims that his Zoootch scares nightmares away – no doubt because the poor dear is too terrified of the creature to slumber!

With lots of white space, black-and-white illustrations, and a variety of short and long poems in bold type, this is a collection that will appeal to a wide variety of children including beginning readers and older reluctant readers. Most of all, youngsters will feel welcomed by the warm voice of the poet who seems to recognize the talents, quirks, and vulnerabilities of his readers and embraces them all with his big heart. It's a good place to be – with Every Thing On It.