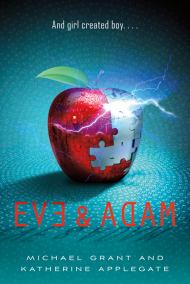 What would it be like to create your perfect mate? What if you were a fifteen year old, who had that opportunity and the smarts to do it? Really, who is not fascinated by the technology that could create new life and the chance to do it?

This is the exciting and topical premise for the first installment of a new teen series by Michael Grant (Gone series) and wife Katherine Applegate (Animorphs series). Evening (Eve) is the 15-year-old daughter of Terra Spiker, a super-rich, powerful and brilliant bio geneticist and head of Spiker Pharmaceuticals (think big, rich, and powerful -- like Microsoft) When Eve has an accident that damages her leg beyond repair her mother hijacks her from the hospital takes her to the Spiker labs to get “better” medical treatment. While she is there healing, her mother puts her to work on a project of creating the perfect boy in a simulation program her Mom has been working on. At the same time, Eve becomes very attracted to Solo, a teen guy who lives and works at the labs. She tries to keep her distance and be cool as they awkwardly get to know each other, but she is strongly drawn to Solo.

The ensuing creation of Adam, the perfect boy grows into a much bigger project than expected. Designer genetics, big science, power, and money create an interesting mix.

Eve also has a BFF, Aislin, who is rich and troubled. They share their difficult relationships with their parents and troubles with boys and remain loyal to each other through thick and thin. Their friendship rounds out the intrigue, mystery and irreverent humor laced throughout the story.

The telling of Eve and Adam is full of twists and turns; it is this layered and suspenseful unfolding of the story that makes the book, related in alternating chapter voices of Eve and Solo, so exceptional. Readers will think they know what’s going on and then the story takes a 90 degree turn. In the background of the plot, there are always the moral, ethical and scientific questions about genetic engineering, raising difficult issues about what life is. The authors leave us with many open questions and much to think about.