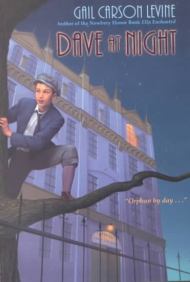 After his adored father dies falling off a roof in 1926 and no one else in the family is able or willing to take him in, eleven-year-old troublemaker Dave is sent to the Hebrew Home for Boys in Harlem, New York. At the HHB, nicknamed the Hellhole for Brats, Dave is accepted by the other Elevens, but Moe, one of the older boys, assigns himself as Dave’s bully, the one who eats half of Dave’s food at each meal. Mr. Bloom, the terrifying headmaster, or Mr. Doom as the boys call him, steals from Dave’s suitcase his only treasure—a wooden carved Noah’s Ark his father made for him. Dave plans to run away, but first tries to reclaim the carving from the cabinet in Mr. Doom’s office, enduring a beating when he is caught.

In the meantime, Dave figures out a way to sneak out of school at night. On the street, he is befriended by Solly the gonif, an old Jewish man with a long gray beard and a big gray parrot perched on his shoulder. “Tell for you your fortune,” Solly’s bird says. Solly takes Dave with him to rent parties in Harlem where he teaches the boy to tell fortunes, and Dave is befriended by Irma Lee, an African American girl his age. The eccentric characters—Dave’s classmates at the HHB, the art teacher who sees promise in him, and the partygoers of the Harlem Renaissance crowd—make this atmospheric novel, which is loosely based on the experiences of the author’s father, unforgettable.

Share some of the poems from The Dream Keeper and Other Poems by Langston Hughes, one of the icons of the Harlem Renaissance, originally published in 1932. Encourage your children to ask parents and grandparents to relate stories of unforgettable school experiences. You probably have plenty of colorful anecdotes that will enthrall them.