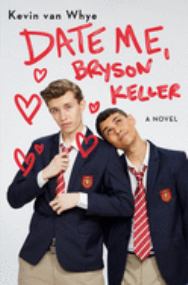 DATE ME BRYSON KELLER is a tropey young adult romantic comedy that features a gay love story. Bryson Keller is the most popular boy in school, and every girl wants to date him.  He is dared to date someone new every week until the end of the school year, and so far, he is successful. A new girl asks him out every Monday morning, and he plays the perfect boyfriend all week until Friday when he politely breaks up with the girl. What happens when a boy asks Bryson out instead? Well, he might actually fall in love for real.

This books feels like a combination of all of the rom-coms of the 1990s and early 2000s in the best way possible. It fully embraces the fake dating and friends to lovers tropes and it’s hard not to have heart eyes the whole read. Bryson is adorable and really does make the perfect boyfriend, but Kai is the real star of this book. He has known he is gay for some time, but he’s too afraid to come out to anyone. This makes him a bit insecure, but also gives him an interesting perspective. He is biracial and part of a religious family. He has faced a lot of discrimination, and so it is nice to watch his positive relationship with Bryson develop. He finally finds someone who fully accepts him for who he is.

Despite all of the cuteness, the book does touch on some more serious subjects. Bryson has a bad relationship with his father, and while his life seems perfect on the outside, we learn that his home life isn’t the greatest. There is also a major plotline involving bullying and homophobia. Kids are cruel, and the author does a good job at portraying this in DATE ME BRYSON KELLER.

A lot of people think that we have progressed so much as a world that those in the LGBTQ+ community no longer face any discrimination or difficulties with their sexuality. This book challenges that. Kids are still cruel and the hive mentality of high school means kids will gang up on those who are different just because that’s what everyone else is doing. It’s really sad, and shows that we as a society still have a long way to go. This book is the best of both worlds because it makes the reader think about these serious topics, but it also provides an adorable romance with a happy ending. This is the book LGBTQ+ teens need to read. Representation is important, and DATE ME BRYSON KELLER is an ownvoices book that shouldn’t be skipped.