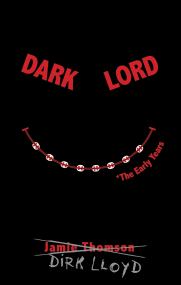 “He looked into [the mirror] and saw the face of a brown-haired, unremarkable, somewhat tubby human child of about twelve years of age.  He couldn’t bear the sight – where were his majestic horns, great canine fangs, and bony skull ridges?

If you asked him what the worst part of his predicament is, Dirk Lloyd would have a hard time picking just one thing: he is stuck on a strange planet, trapped in the body of a human boy, in small town called Whiteshields, England, living with the Purejoie family, placed in the seventh grade at the local school, and under the thumb of a principal whose name is Mr. Grousammer; people keep telling him that he was in some kind of accident and that’s why he’s all mixed up; no one even acknowledges that he is the Dark Lord; and he’s lost all of his powers of domination and destruction.

All Dirk wants to do is get home to the Darklands where he can resume his true identity and regain his powers. But he is going to need help. As Dirk settles into this new life, he finds a small group of friends who may not believe him exactly, but genuinely like him. Perhaps they’ll help him escape. He’s got a plan that begins with conquering the school. “Mwah, ha, ha!”

Dark Lord is told in Dirk’s voice a kind of bravado colored by typical middle-school insecurities (but don’t tell Dirk that!)--and through diary entries, newspaper clippings, and even his report cards. With plentiful illustrations that show just how Dirk sees things, this very funny story builds on readers’ own fixations on electronic games, superhero comics and movies, and on their fantasies. The set up gives Dirk plenty of room to look at our world and focus on some pretty odd things about it--stuff we may not notice otherwise. Add to this hilarious misunderstandings, clever puns, and altogether surprising incidents, and Dark Lord is a book that will soon be many middle-school kids' favorite.