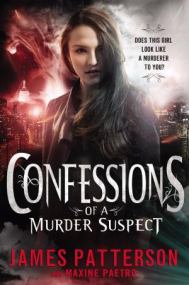 When sirens blare outside of her upscale New York City high rise, fifteen-year-old Tandy Angel believes it is just the sounds of the city … That is, until two police detectives show up at her door, demanding entry into the apartment she shares with her family. The home quickly turns into a crime scene, as the detectives discover Tandy’s parents lying dead in their bedroom, victims of an apparent homicide.

But Tandy does not have time to grieve their passing or sift through her complicated emotions. The detectives begin to ask questions, trying to manipulate a confession and trap Tandy in half-truths. She and her brothers are the prime suspects. After all, who else had access on that terrible night? Who else had motive to kill the mega-wealthy owner of Angel Pharmaceuticals and his wife?

Could Matthew, her older brother, the burly NFL star trying to distance himself from his family, be a murderer? What about the gentle Harrison, her twin; could the weight of their parents’ expectations be enough to prompt him to kill? Even ten-year-old Hugo, with his passionate temper, is suspect.

Between aggressive and nosy detectives, neighbors with questionable motives, and a stunning New York City apartment building filled with secrets, Tandy certainly has her work cut out for her. How well does she know her family? How well does she know herself? Tandy’s own confessions weave throughout the narrative and reveal a second layer of intrigue to the mystery at hand.

Fans of James Patterson’s Maximum Ride will enjoy being introduced to the similarly strong and plucky Tandy Angel, who must use all of her cunning and wit to solve the mystery of her parents’ death. The first in the Confessions series, this novel clips along with plenty of suspects and red herrings to complicate the plot and keep readers guessing.

What other secrets remain hidden in the Angel family’s past? What lies? Could Tandy herself be prone to murder?