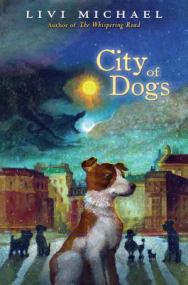 On Sam's birthday, the one he thinks will be the worst ever, his Aunty Dot brings to the house a small white dog she has just hit with her car. The dog, which Sam names Jenny, has no obvious injuries, though in her mouth, she is holding a sprig of mistletoe carved like a dart. What Sam does not know is that Jenny has come from another one of the nine worlds, where she inadvertently altered the course of destiny when she saved her master, Baldur, the Golden Boy, from death. Jenny will need the assistance of all the dogs she meets in Sam's neighborhood, because the fate of this world is now at stake, too. There's Pico, a Chihuahua with a bark like a Great Dane; Gentleman Jim, a massive old fellow, on his last legs; Boris, a gentle, slightly-deaf Lab; excitable Checkers; and nervous Flo, a standard poodle dyed pink by her eccentric owner. Are they up to the task? You bet. The modern world collides with the ancient worlds of Norse and Greek mythology in this adventuresome and winsome fantasy where dogs save the world.

You'll want to dig into some Norse myths about Baldur, and Greek myths about Orion, Charon, Cerebus, and the Furies, each of whom plays an important role in the story. Children who love Rick Riordan’s The Lightning Thief will be taken with this one, too.