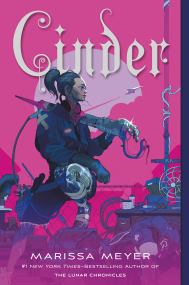 Androids. Cyborgs. A colonized moon. Cinder is a unique twist of the fairytale classic that has been retold countless times. Set in post-apocalyptic empire of Asia, instead of a demure Cinderella, we follow a defiant Linh Cinder—a gifted mechanic and cyborg. Yes, the new Cinderella is a cyborg!

Mirroring the fairytale, Cinder lives under the guardianship of her cruel stepmother, Linh Adri, who berates her for simply existing, and two stepsisters, Linh Pearl and Linh Peony. However, instead of losing a glass shoe, Marissa Meyer’s Cinderella has to worry about losing her foot—if she can’t find spare parts for the gears.

A strong female protagonist who transcends gender roles, Cinder operates a hole-in-the-wall mechanic shop in New Beijing where the handsome Prince Kai of the Eastern Commonwealth pays her a visit with a request to repair his android. She accepts, but doesn’t have the materials to fix it, or her leg.

Cinder visits a salvage yard with Peony, the stepsister who has always been kind to her. In a turn of events, Peony contracts the fatal Letumosis, a disease originating from the moon colony, Luna, with no known cure that plagues the empire. Prince Kai’s life also takes an unexpected turn when his father dies of Letumosis and he becomes Emperor of the Eastern Commonwealth.

Queen Levana of Luna pressures the new emperor to form an alliance through marriage. Prince Kai knows full well that refusing the marriage means war with the Lunars, who can manipulate bioelectricity to control a person’s thoughts and actions. Accepting the marriage proposal means the subjugation of his people.

The first of the Lunar Chronicles trilogy, Cinder blends steampunk motifs with fantastical elements to create a refreshing Cinderella retelling for young readers who aged out of their Disney-princess phase, while fulfilling their nostalgia for it. And with an Asian protagonist, Cinder is sure to invite readers who never saw themselves in those princesses and give them a journey to remember.