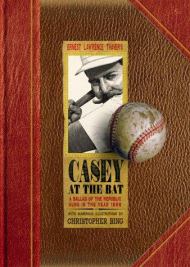 In Christopher Bing's brilliant, Caldecott Honor-winning interpretation of Thayer's classic 1888 narrative poem, we are astonished, amazed, and awestruck at his multilayered, wondrous scrapbook, set up like an old 1888 newspaper. Baseball lovers of all ages will spend hours poring over the tickets, newspaper clippings, old baseball cards, a stereoscope card, as well as ads for products like Cockle's Anti Bilious Pills, all superimposed on the Mudville Monitor newspaper with crosshatched illustrations of the poem drawn with pen, ink, and brush on white scratchboard.

The poem begins:
The outlook wasn't brilliant for the Mudville nine that day;
The score stood four to two with but one inning more to play.

There seems little chance that Casey will have a chance at bat, but then two men get on base and Casey steps up to the plate. Disdainful at the first two pitches, mighty Casey saves himself for the third, assuming he'll save the day for the Mudville team. Stee-rike Three! The poem shows what happens if you let your own self-esteem run away with you and take your skills for granted.

Do you know about the other Casey, Katie Casey, the girl in Jack Norworth's 1908 baseball anthem? You can find the complete song on the endpapers of Shana Corey's Players in Pigtails, a fictional picture book about Katie Casey and the All-American Girls Professional Baseball League of the 1940s, and at sniff.numachi.com/pages/tiTAKEBALL;ttTAKEBALL.html. Then uncover a surprising and comical array of baseball facts from the early days of the game in Sally Cook and James Charlton's Hey Batta Batta Swing!: The Wild Old Days of Baseball.

In Gutman's re-encounter with Casey, it's the last game of the season, and with Mudville tied for first, it's once again up to Casey to hit in the clutch. Will he blow it this time, too? Casey gives that ball such a mighty whack, it careens out of the stadium, across the Atlantic Ocean, knocks the nose off the Sphinx, races back through time to scare off the dinosaurs, and heads into outer space. You can also read and compare the parody poem, "Scientific Method at the Bat" from Jon Scieszka's Science Verse.