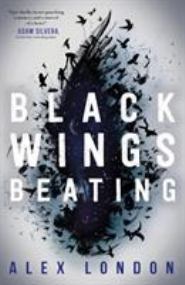 BLACK WINGS BEATING is one of the most unique YA fantasy novels in recent memory. In Uztar, people revere and respect birds of prey, and falconers are considered heroes. Twins Brysen and Kylee live in a small village of falconers. Brysen wants nothing more than to win the heart of the boy he loves and to become an expert with birds. Kylee is already an expert with birds, but she wants nothing to do with them. The twins’ abusive father was killed while trying to capture the legendary Ghost Eagle, and their mother is barely conscious in her grief. Brysen and Kylee are almost polar opposites, but they are all the other has, so they must stick together.

The story truly begins when Brysen’s boyfriend and trainer, Dymian, makes an agreement he can’t keep in order to settle debts. He promises he will capture the Ghost Eagle, the incredibly dangerous bird that killed the twins’ father. Brysen will do anything he can to help Dymian, so he decides to chase the Ghost Eagle himself. Kylee is against the idea, but no matter how much she protests, Brysen doesn’t change his mind. She decides to go with him on his journey to protect him. After all, Uztar is a dangerous place, and Brysen isn’t as great at falconry as he thinks he is.

This book is told from both Kylee’s and Brysen’s perspectives. Both have very distinct voices that keep the story interesting.  Kylee is quiet and caring and Brysen is proud and irrational. The sibling relationship is the heart of this book. Brysen and Kylee are very different and fight constantly. Readers will be really annoyed with Brysen at first because of his rudeness and poor decision making, but he becomes more and more likeable as the book progresses and he grows as a character. It takes a great writer to purposefully create an unlikable character and then slowly make him likable and Alex London does it effortlessly.

A fantasy world centered on birds is one of the most unique concepts you’ll see in a YA book. The birds are powerful and majestic, and by the end of reading this, you’re going to want a falcon companion of your own. The world-building is excellent and the writing is beautiful. If you’re a fantasy fan looking for something different in a sea of similar books, you absolutely have to give this one-of-a-kind series starter a read.