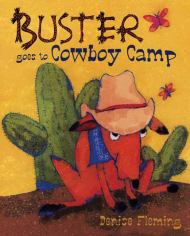 I love Denise Fleming's paper pulp-illustrated picture books in general, but this one left me howling, it's that cute. You may already be acquainted with Buster, a soulful reddish-brown dog with black-tipped paws, ears and nose, from his eponymous first book, Buster, where he had to come to terms with an intruder in the house, a new white cat named Betty.

Now Buster's owner, Brown Shoes, is going away for the weekend, and Buster is none too happy to be dropped off at Sagebrush Kennels' Cowboy Camp. Red Boots (a man whom we only see from a dog's-eye view as blue pant bottoms and pointy red cowboy boots) greets Buster with a great big cowboy howdy, ties a jaunty blue bandana around the dog's neck, and gives him the "tenderfoot tour of the camp." Still, Buster is homesick. It's not easy sleeping on his lumpy bed in the bunkhouse, especially with the dog next to him "sleeping and snoring and drooling."

The camp activities of the next day perk him right up. He paints a Wanted poster, plays buckaroo ball, howls along with cowboy songs, helps build a campfire, and eats beans and bacon for dinner. As Buster discovers his heretofore-untapped talents, he lets down his guard, and has a great day. Then he hits the hay for some sleeping, snoring, and drooling of his own. Fleming's illustrations are filled with desert colors, saguaro cacti, and lots of good cheer.