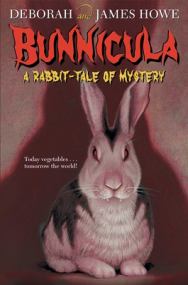 The book begins with a letter signed by Harold X, a very articulate dog who wishes the story of his family to be heard. The X family, aka the Monroes, have two boys, Toby and Peter, and live with Chester, a cat and of course the narrator, Harold the dog.

And then there's an addition to the family. Young Toby, at a screening of Dracula, finds a small black and white rabbit, brings it home, and names it Bunnicula. .

Bunnicula, has a mysterious handwritten note tied to its neck, but none of the Monroes can understand the language. Harold recognizes it as an obscure dialect of the Carpathian Mountain region, and reads "Take good care of my baby." He, of course, can't relate the translation to his humans because he's a dog. Harold and Chester, the cat, become suspicious of the rabbit.  Among other strange things, a black V on its face seems to mark the beginning of a strange fur cape, it's a nocturnal creature, and it has fangs.

They also witness it maneuvering in and out of the refrigerator (vampires, it's told, cannot be held back by locks and doors) and sucking a red tomato white. But to their masters, do Harold and Chester merely seem jealous of the new pet's attentions? Or will the dog and cat have to do something about Bunnicula before it's too late?

Bunnicula has been a read-aloud favorite since its publishing in 1979. This cheeky mystery plays around with the ridiculousness of a cute bunny having vampiric urges, while dropping more evidence to support Chester & Harold's  fears as the story unfolds. The mystery and clues shared between the two pets is charming and involving for kids of any age.

"This will take forever if we leave it up to them. Sometimes, human beings can be so slow," Chester says, and readers will agree, enjoying the pets-eye view of the Monroe family lounging, while Chester and Harold endure thrills and chills as they attempt to bring down Bunnicula.