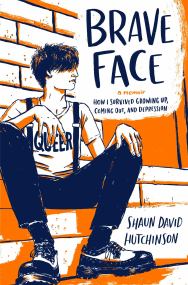 BRAVE FACE is a memoir by Shaun David Hutchinson, a popular YA writer of books about queer teens. In this YA nonfiction, Hutchinson discusses growing up, coming out, and surviving depression in the 1990s. The book deals with very emotional and dark subject matter, but ultimately paints a message of hope for young readers.

The memoir opens up in the early 90s when a young Hutchinson struggles with identity in middle school. He is very young and feels different, but is not quite sure why. He dates girls and makes friends, but he always feels confused and angry. It takes him a while to realize it, but he does ultimately accept that he is gay.

Hutchinson spends a lot of time in the memoir discussing his internalized homophobia. He understood and accepted that he was gay, but he hated himself for it. Growing up, he always had an idea of what his life would look like, and being gay made his dreams seem impossible. He hadn’t met very many gay people in real life, and so he only knew what society and pop culture told him. In the 1990s United States, this made things difficult for him. He saw people around him hating gay people, he saw gay people dying of AIDs, and he saw films and music poking fun of gay people. How could he have a future if this was all that was coming to him?

Reading about how Hutchinson navigated his internal negative feelings is extremely powerful. He openly discusses his battles with mental illness and how it tied in with his negative feelings about his sexuality. At one point, Hutchinson reaches such a low point, that he attempts suicide. The book warns of this in the very first chapter, so readers who are sensitive about this topic should approach with caution. However, Hutchinson is very open, honest, thoughtful, and delicate with how he handles it.

There is no denying that this book is sad, but it also brings with it a message of hope. One of the main themes in the book is the necessity of being able to see characters like oneself in popular culture. One of the reasons Hutchinson found it so difficult to deal with his sexuality was that he could find zero examples of gay people having happy futures—not even in fiction. It is one of the reasons he ultimately became a YA writer of books with queer characters. The world has changed a lot since the 1990s, but it still has a long way to go. The world is making progress, and it is good to see one more YA book with gay representation on the shelves. Even if you’re not usually a fan of nonfiction, this is an absolute must-read for anyone.