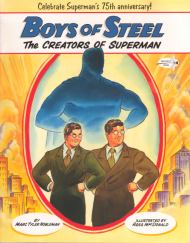 With balloon dialogue and classic retro comic book style illustrations, heavy on the yellow, this picture book biography looks like an old time true confessions story. During the Great Depression, in 1930, two nebbishy guys, Jerry Siegel and Joe Shuster, met in high school. Jerry's heroes were fictional characters from comic strips like Tarzan, Flash Gordon, and Buck Rogers. He wrote stories, too, pounding them out on his typewriter. Joe loved to draw, scrounging wrapping paper from the butcher when his family couldn't afford art paper. Though one of Jerry's teachers told him he was wasting his time writing "trash," the two boys had big plans. They started to develop a new character, "a brave, tough man who fought for truth and justice."

Lying in bed one night in the summer of 1934, Jerry had a brainstorm. What if their guy was so powerful he could leap over buildings, a strongman who would be like Samson and Hercules combined, an alien from another planet who looked human and protected people, but disguised himself with a secret identity. (Sound familiar?) He brought his concept to Joe to do some sketches. For three years, their idea was rejected by editors, but then they got lucky. One editor was starting a new type of magazine called a comic book. In 1938, their first issue was published, and Superman was born.

As a story of perseverance and of underdogs triumphing, this will be inspirational for kids. The three-page Author's Note at the back gives all the details, including the sad fact that the two guys sold all the rights to the publisher for a whopping $130, and sued DC Comics in 1947 for five million bucks. They lost. Not until 1975 did they receive a settlement, including credit for their creation. You don't have to share those details with your kids, though, unless they're interested.

What readers would probably love to do in response is make their own comics. To look at Superman covers and research more about the big guy, check out www.supermanhomepage.com.

Beatty, Scott. Superman: The Ultimate Guide to the Man of Steel. DK, 2006.

McCarthy, Meghan. Aliens Are Coming!: The True Account of the 1938 War of the Worlds Radio Broadcast. Knopf, 2006.