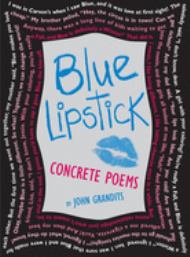 First there was the uproariously kinetic book, Technically It's Not My Fault: Concrete Poems narrated by Robert, who, in 28 concrete or shape poems, spends a fair amount of time complaining about his annoying big sister, Jessie. Now it's Jessie's turn to snipe. She's in ninth grade, so she has lots more to agonize over: bad hair days, pep rallies, liking Elton Simpson, and, of course, her jerky little brother, Robert. Emotions erupt in her collection of 33 concrete poems, beginning with the title poem which is written around the perimeter of the front cover. They meander and cascade across each page in a swirl of assorted blue and black fonts. There's "A Chart of My Emotional Day," which she diagrams for a math assignment; "Volleyball Practice," with sentences that bounce back and forth on the page; and “My Absolutely Bad Cranky Day," a simply glorious alphabet and timeline combined. Have fun singing “The H-U-P Song,” where Jessie and her little cousin Natalie rewrite “The Alphabet Song.” You’ll never recite the ABC’s in quite the same way. How John Grandits, a man, has gotten under the skin of a ninth grader with such resonance, honesty, and humor, I can't fathom, but if you were ever a ninth grade girl, you'll marvel. And if you weren't, you'll learn a lot.