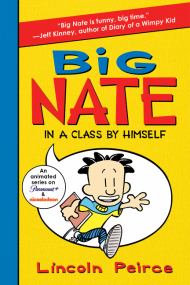 Often compared with Jeff Kinney’sDiary of a Wimpy Kid for its ability to make kids fall off the bed in hysterics, this series delivers its own fresh dose of cringe-worthy comics and comedy. Nate Wright may look like an average sixth grader, and he admits he’s not exactly Joe Honor Role; nevertheless, he just knows he is destined for greatness. He keeps an illustrated list on his closet door of his special talents, which include soccer (he’s the middle school team goalie), music (he says his band, Enslave the Mollusks, for which he is the drummer, ROCKS!), cartooning (he specializes in teacher caricatures), and table football (“…it might be a tough way to make a living”).

Nate’s cocky ruminations are buttressed with cartoon panels, spot art, sidebars, and occasional full-page cartoons drawn on lined notebook paper. Based on the author’s popular syndicated comic, this side-splitting graphic novel will be a huge hit with readers, who will be relieved to know the second book,Big Nate Strikes Again, is due out in November, 2010.