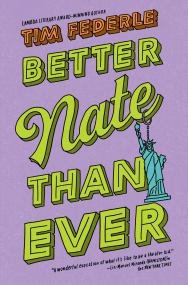 At home in a small town outside of Pittsburgh, PA, Nate Foster, 13, feels like a fish that flopped out of the Monongahela River and is gasping for air to survive. He is decidedly unsure about his own sexual orientation, but the jerks at school have decided he’s gay and pummel him with “faggot” every chance they get. His parents shower their attention on older brother and star athlete, Anthony, and try to steer Nate from show tunes to soccer practice.

Luckily, Nate has a true best friend, Libby, who shares his love of musical theatre. When a once-in-a-lifetime confluence of events occurs – his parents go out of town to celebrate their wedding anniversary, Anthony has a distant track meet, and Libby learns of an open casting call for “E.T.: The Musical,” Nate barely hesitates. He lies his way onto a bus for NYC hoping to audition and return before anybody notices he is missing.

Surprise! This plan doesn’t work out the way Nate hoped it would.

Instead, what readers get is a delightful (mis)adventure with an utterly lovable main character. Nate is self-effacing and smart, stuck at that awkward juncture of adolescence and adulthood. He arrives in Manhattan nervous but awestruck.

The audition process is equal parts horrifying and hilarious. Nate, clearly a minor on his own, is saved from expulsion by the (highly-unlikely-but-I-was-willing-to-suspend-my-disbelief) arrival of his Aunt Heidi, who is estranged from Nate’s mother but has been alerted to her nephew’s escapade by the wise-beyond-her-years Libby.

It is giving away too much to say more about how the audition goes, but what sets Nate apart and targets him for ridicule in Jankburg, PA, makes him stand out in the eyes of theater people. Tim Federle, a Broadway veteran who worked as an assistant choreographer for the musical Billy Elliot, was inspired to write the book after seeing a boy audition who resembled a character from a 1950s comic strip – pudgy and freckled. He was not going to be cast as a young ballet dancer, but his quirky performance stuck with Federle when he created Nate: “It’s important to be told, when you need to hear it most, that the thing that might get you picked on in one town might get you paid in another.”