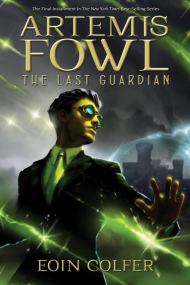 Dwarves and dwarf phlegm. Trolls and troll patties. Killer crickets. Coded fireflies. Centaurs. Fairies. An evil pixie. A few humans. Magic. Black magic. And gadgetry produced with profound intelligence and creativity. Mix these elements together in a war that threatens the whole human race. Every minute is critical.

Artemis Fowl, boy genius, is on the case. Helping him, and also keeping him alive, are his friends. Butler’s bravery, Holly’s feistiness and skill, and Foaly’s inventions work chapter after chapter to avert near-certain disasters of cataclysmic proportions.

The family of Artemis Fowl lives on an estate in Ireland, where an enormous amount of residual magic attracts magical creatures and leads the Fowl family to a belief in magic. As the story rockets along, the reader discovers the details of the magical event that took place on the estate nearly ten thousand years ago. Opal Koboi, the evil pixie and the arch enemy of Artemis, masterminds the ingenious twisting of this magic in her mission to destroy all humans.

Many factors have made this series stand out in the vast genre of adventure/fantasy/science fiction novels. As the series has progressed, in both text and graphic formats, Artemis has evolved from a teenage criminal mastermind to a morally sound person who is willing to sacrifice his life to save humanity. In the first book, he kidnaps a fairy to promote the fortunes of his family. Subsequently, he befriends the fairies.

Artemis himself is unapologetically - even arrogantly -intelligent. Besides consistently thinking outside any box, his vocabulary (undulated, redundant) and his general knowledge (using French phrases like “n’est-ce-pas) are never dumbed down. He’s also a bit dorky and totally uncoordinated. His friends joke about the frequency with which they bail him out of trouble. He dearly loves his family and is protective of his little brothers. His nearest and dearest companions are a mix of races and breeds. He’s a hero who endears himself to readers, even with his flaws.

Laugh-out-loud humor completes this reader-friendly package, and adds to the positive energy that is already pounding along at top speed. For example, as the protagonists wait for their enemies to launch an attack: “Butler lay unconscious across the rear seats with smoke literally coming out of his ears, a symptom that had never been professionally diagnosed as a good thing.”

Artemis Fowl has it all -- and then some. Readers who have made these critically-acclaimed novels best sellers since the first book was published in April, 2001 will warmly welcome The Last Guardian.