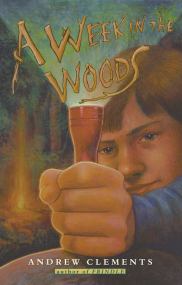 A Week in the Woods

You remember Frindle, of course, and fifth grader Nick Allen who invents a new word for the word "pen"? Natalie Nelson, a sixth grader who wants to get published in School Story? Greg Kenton writing and selling his own comics at school in Lunch Money? The war between fifth graders, boys versus girls, in No Talking? When a new Andrew Clements novel comes out, I drop everything and read it. He has an unerring sense of not just how middle grade kids think, but grownups, too, especially teachers, which shouldn't come as a surprise, since he taught school for several years. Now meet a rich kid who acts like he doesn't care, and a dedicated teacher who can't stand kids like that.

Every April, science teacher, Mr. Maxwell, organizes the week-long camping trip for the entire fifth grade at Hardy Elementary School in New Hampshire. This year, there will be trouble. Mark Robert Chelmsley's parents are wealthy businesspeople who have just spent millions renovating a historic farmhouse nearby. They plan to have Mark finish fifth grade at the local public school, and go off to an exclusive boarding school next year. This neglected kid is angry, bored, and arrogant. He slouches through each class, staring out the window, waiting for the weekend. After his bad attitude deflates Mr. Maxwell's special Friday afternoon exploding Hindenburg hydrogen lesson, the teacher labels him a spoiled slacker.

Mark loves his weekends. He snowshoes, explores, and goes camping in the woods, and he thinks about things. Realizing he's been acting like a stuck-up jerk in his new school, he even decides to lighten up and give it a chance, to be the new and improved kid. It's not so easy. Mr. Maxwell is not ready to forget or forgive. During that Week in the Woods, those feelings will come to a head when Mr. Maxwell erroneously accuses Mark of bringing a knife with him on the camping trip. When Mark heads off into the forest alone, Mr. Maxwell runs after him. Someone's going to get hurt.

This new one will be as much for you as an adult as it is for your kids, who will all want to go camping after reading it. There's much to chew on here. What is a first impression or a preconceived notion? Have you ever judged someone after a first meeting, only to change your mind about that person as you got to know him? Have you ever acted in a way you regretted later? What did you do about it? Why does Mark act like he doesn't care in school? How and why is he different at home? Have you ever been the new kid? What did you do to fit in? Kids, do your teachers know the real you? Grownups, how well do you really know your kids?