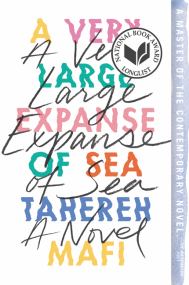 A Very Large Expanse of Sea

It’s one year after the tragedy of 9/11 and Shirin, a Muslim teenager is about to start a new school in yet another small town. Unlike her older brother, who skates by easily with his good looks and charisma, Shirin is dealing with a lot of anger and tries in every way possible to avoid interaction with the other students. She has faith in no one after facing a barge of racist comments sputtered at her, and even a horrible attack of physical violence. She refused to stop wearing her hijab and it makes her an easy target of hate. Even though Shirin wears the hijab of her own accord, she is tired of the rudeness and having to explain herself even to those who attempt to kindly interact with her. She puts no effort into classes, but rather spends her time after school with her brother, learning to break dance, where she can lose herself in the music and training. At dance battles, no one cares what she looks like or what she’s wearing on her head, only the dance skills matter.

When Shirin get assigned to be science lab partners with Ocean James, she quickly assumes he is the same as all the rest of the kids at school. However, as Ocean continues to try to push through her barriers and legitimately get to know her, Shirin finds her defenses slowly crumbling. She knows nothing of Ocean’s life within the school, but when the two of them are together, the chemistry on the page is palpable. No matter how much Shirin tries to warn Ocean about the ramifications of him becoming intertwined with her during these turbulent times, Ocean can not stay away from her. Inevitably when public opinion from students and even worse adults come into play, things start to fall apart more horribly than Shirin had anticipated. In the aftermath, both Ocean and Shirin have to decide what matters most to them above all.

Tahereh Mafi, the author of the Shatter Me series, is no stranger to writing heartbreaking romance stories, where protagonists have to overcome all odds. A Very Large Expanse Of Sea is grounded in realism of a very turbulent time in American history, where fear led way to a huge amount of hate. The author shows the dangers of prejudice through a powerful story of first love and hope, in a place where both seem impossible. Though the story takes place over a decade ago, it continues to be a timely one and brings up important discussion topics of identity and bias.