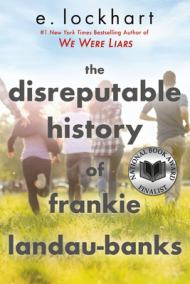 The Disreputable History of Frankie Landau-Banks

The story begins at the end, with a letter addressed to the headmaster and Board of Directors at Alabaster Preparatory Academy, one of the country's most elite private boarding schools. It begins:

"I, Frankie Landau-Banks, hereby confess that I was the sole mastermind behind the mal-doings of the Loyal Order of Basset Hounds. I take full responsibility for the disruptions caused by the Order-including the Library Lady, the Doggies in the Window, the Night of a Thousand Dogs, the Canned Beet Rebellion, and the abduction of the guppy. . ."

The summer after her freshman year, Frankie blooms into a "curvaceous young woman with an offbeat look that boys found distinctly appealing" transforming from "a homely child into a loaded potato." Frankie's sister, Zada, graduated in June, and now Frankie will be on her own at Alabaster, away from her overprotective family who call her Bunny Rabbit and treat her like a child. Back at school in September, Frankie encounters popular senior and golden boy, Matthew Livingston, on whom she's had a secret crush since freshman year. Not only does Matthew notice her, he flirts with her and introduces her to his friends. He likes her and thinks she's pretty. He even bestows on her his treasured Superman T-shirt. At first, it's enough that she's dating him. Matthew Livingston! What girl wouldn't be thrilled? Zada, phoning from college, warns her, "Don't let him erase you."

The Loyal Order of the Basset Hound, an all-male secret society at Alabaster, has been in operation for decades. Frankie's old-boy father was a member. This year's Basset King is none other than Matthew Livingston. The young men meet in secret, drink beer, throw secret parties, and pull pranks on campus. Feeling closed out and marginalized when Matthew deserts her to go off with his best friend, Alpha, Frankie tails him and spies on one of their meetings. She yearns to be part of their group with its bonding, loyalty, and power, but realizes Matthew and his buddies would dump her in a second if she tried. However, she knows one thing that they don't. The oath they recite so dutifully at every meeting-"Atop the crown of Alabaster, bind it tight with sticking plaster. Look to the west, boys; Look to the books, men! . . ."- actually means something. There is a secret history of the Bassets that was hidden somewhere on campus decades before, and Frankie sets out to find it. Matthew may think of her as "harmless," but now Frankie is determined to be a force.

The dispassionate omniscient narrator analyzes and watches over Frankie's rise from inconsequential female to The Alpha Dog, leaving it to the reader to decide if she's an evil genius, an obsessed psychopath; a power-hungry weenie; a rebellious, ambitious rule-breaker who craves notoriety; or a young woman wronged. A Printz Honor book for young adult fiction, this was one of the most compelling, enjoyable, diabolical, and witty reads of 2008.