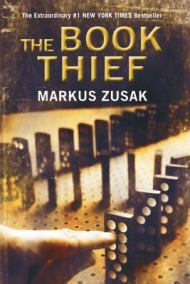 How can humans be so beautiful and glorious…and so ugly and destructive?

For teens who are ready to explore this question with author Markus Zusak, The Book Thief will be an unforgettable journey and quite a read.

A warning, though: The book takes place in Germany during WWII and the Holocaust. Readers are going to meet some heroic characters, and some of those heroes aren’t going to make it. It’s hard to let them go.

And readers are going to meet Death. He’s the narrator, and he has a lot to say. If that makes you a little uncomfortable, please, don’t be afraid. Believe it or not, Death has a heart, and sometimes he’s even funny. He feels very misunderstood. He points out that it is not Death, but humans who are responsible for starting wars and killing people, and he wants to set the record straight. Death has only one responsibility: To gently carry the souls of those who die to a safer place.

Now a little bit about the story. Liesel Meminger, a nine-year-old German girl, is sitting at the grave of the last remaining member of her family, her brother Michael. War has taken everything from her, leaving her truly alone and terrified. As she walks away from her brother’s grave, she notices a book called The Grave Digger’s Handbook. Although she has not learned to read, she “steals” the book, hoping it will be a keepsake of her brother and bring her comfort.

Liesel is sent to live with the Hubermanns, a compassionate German couple who become her foster parents. They soon discover that Liesel’s experiences with war have left deep emotional scars. Her foster father teaches her to read, and that becomes her means of escape. Books give her what she needs to survive.

A couple of “stolen” or borrowed books help Liesel forge some special friendships. There’s Max, a 24 year old Jewish fighter who is secretly hidden and protected in the basement of the Hubermann’s home. Liesel shares food and her books with him. Their precious time spent reading together saves Max’s life. It also helps create a surprise at the end of the book.

And there is Rudy Steiner, a ten year old German boy who is spirited and athletic. He has a secret crush on Liesel and dreams of being able to steal just one kiss from her. The two of them spend a good part of each day trying to figure out where they can find more hidden book treasures for Liesel. Unfortunately, the Nazis notice Rudy’s athletic talents and invite him into their special training program for athletically-gifted boys. Rudy resists; he wants nothing to do with Hitler. Sadly, he has to pay a high price for his convictions: The Nazis are so angered by his disinterest that they punish him by sending both his father and Liesel’s foster father to hard labor camps. Eventually, Liesel’s home is bombed. She survives the destruction, but many of the friends she has come to love do not.

Death appears at the site of the bombing. (Remember, it’s his job.) Death is heartbroken when he comes upon one of Leisel’s friends. “He does something to me, that boy. He steps on my heart and makes me cry.” Leisel eventually moves to Australia and lives a long life. When it’s time for her to die, Death comes to visit her as well. He’s witnessed all of her losses and wants to talk to her, but of course, he doesn’t have a voice:

“I wanted to explain to her that I am constantly overestimating or underestimating the human race…I am haunted by humans.”

The Book Thief offers thoughts about life and death. Liesel survives WWII largely because of her goodness, her books and some luck. Death offers the powerful and comforting message that he is not to be feared. Yet no one has the answer to the perplexing and nagging question: How can humans be so beautiful and so ugly at the same time?

Maybe that’s what makes The Book Thief so special. It leaves us with a lot to think about.

Zusak has created a work that deserves the attention of sophisticated teen and adult readers.
School Library Journal

The Book Thief is unsettling and unsentimental, yet ultimately poetic. Its grimness and tragedy run through the reader’s mind like a black-and-white movie, bereft of the colors of life. Zusak may not have lived under Nazi domination, but The Book Thief deserves a place on the same shelf with The Diary of a Young Girl by Anne Frank and Elie Wiesel’s Night. It seems poised to become a classic.
USA Today

Compestine, Ying Chang. Revolution Is Not a Dinner Party. Henry Holt and Co., 2007.