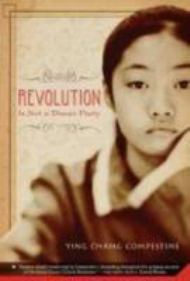 Revolution Is Not a Dinner Party

"The summer of 1972, the year I turned nine, danger began knocking on doors all over China." Ling is the narrator, but the events that follow mirror the life of the author, whose parents were also doctors in the city of Wuhan at the time of the Cultural Revolution. Ling's father, a respected surgeon, learned about Western medicine from an American, Dr. Smith, and treasures the picture of the Golden Gate Bridge the doctor gave him before returning home to San Francisco. Ling reveres her kind and affectionate father who teaches her American folk songs and gives her English lessons, but she has a more formal relationship with her prickly and hard to please mother. Then Comrade Li, the sanctimonious new political officer for the hospital and enforcer of Chairman Mao's policies, moves in to the family's apartment, appropriating Father's study for himself. To "help build a new China," he has the heat and then the power cut off in the building, demands food, and begins arresting "undercover enemies," including Ling's father. Taunted and bullied at school for being "bourgeois," Ling is bewildered and terrified by the growing chaos as the city's social fabric unravels.

A grim and frightening look at power run amok and how it destroys lives and families, Ling's compelling narrative is an instructive reminder of the differences between democracy and dictatorships. "What's freedom?" Ling whispers to her father when he tells her that people go to America to find it. "Freedom is being able to read what you want and say what you think," he tells her. These rights, which we take for granted in America, are not guaranteed in many countries today. Readers will readily see what freedoms Ling did not have, and compare and contrast her childhood with theirs. Ji Li Jiang's Red Scarf Girl: A Memoir of the Cultural Revolution is another startling true account, describing the author's experiences in Shanghai in 1966. The Wall: Growing Up Behind the Iron Curtain is an autobiographical picture book by Peter Sís about his childhood in Prague during the same era.

Readers should remain rapt by Compestine’s storytelling throughout this gripping account of life during China’s Cultural Revolution.
Publishers Weekly

Lin, Grace. Where the Mountain Meets the Moon. Little, Brown, 2008.

Ss, Peter. The Wall: Growing Up Behind the Iron Curtain. Farrar, 2007.