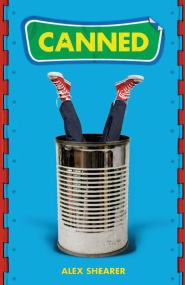 Fergal Banfield's reputation for being clever weighs heavily on him. It makes him want to hide from the world. The boy looks like an eccentric genius, with his untamable hair sticking up in clumps, and glasses that make his eyes look big. And then one day, at the market with his mum, Fergal picks an unlabeled silver can from the bargain bin and wonders what might be inside it. What if it's dog food or something weird? He takes a gamble and buys it, starting a collection of cans that grows over the next few months to 49 until his mum puts her foot down. She announces he can buy one more can, and after that, he must open and use up what's in one can before buying another. When he picks out the fiftieth unlabeled can, it feels lighter than the others. When he shakes it, it rattles. And when he opens it, he finds something unexpected and strange—a gold stud, an earring. How did it get in there? Six weeks later, he finds and buys another lightweight can. This one is even more surprising. Shocking, really. What's in it? A finger. A severed human finger, and it's real. Then he meets a girl named Charlotte. She collects cans, too, and she's found something equally strange and disturbing in one of them. Together, they open a can with a message in it—just one word, in lowercase letters, on a scrap of paper. It says "help."

Really, that's all you have to tell kids to get them pumped to read this quirky mystery from England. The cover is a real grabber, too. On it, there's a huge unlabeled tin can from the top of which protrude a pair of jeans-clad legs ending in a pair of untied red hightop sneakers. The back cover is equally intriguing, with the slogan, "EVERYBODY HAS AN EXPIRATION DATE,” and a Nutrition Facts label. For sure, you'll want to introduce the book by pulling a peeled silver can and a can opener from a shopping bag and have your kids speculate what might be inside. (A tin of nice mushy peas would be perfect.) Librarians, if you still have on your shelves a copy of Konrad by Christine Nostlinger, about a kid in a can (and, oh, Scholastic, I wish you’d bring this one back in print!), you'll have one sweet booktalk.