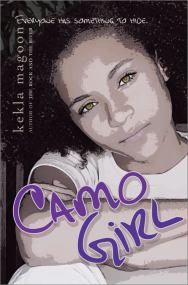 “Zachariah. Eleanor.
These are not our real names. These are our shadow names, our armor, our cloaks.”

Z and Eleanor – Ella in real life – hide behind their alter egos so bad things will bounce off them just like the peas thrown at them during lunch period. If she dropped Z, Ella might have a chance at moving up the school social order, but she will not. Narrated in the first-person, Ella plainly, painfully describes why Z is so important to her; how he alone helped her through her father’s death. Describing herself as curious, sad, and ugly (she believes her classmates when they say the vitiligo on her face looks like desert camouflage), Ella wishes she could reinterpret reality as quests and battles with dragons the way Z can. But since Z’s father abandoned him, Z never rises out of his fantasy world, and Ella is becoming anxious to talk about life. That is when Bailey moves to town. He is the only other black kid in school and notices Ella, not just for her skin color but for her loyalty to Z. He, too, has lost his father, in his case to PTSD (Post-traumatic Stress Disorder). Their burgeoning friendship is a trigger for the emotionally-fragile Z who, in a climatic moment, runs away to Las Vegas on a quest, forcing Ella to admit that the games have to end.

The author skillfully sketches out easily-recognizable scenes, and the characters, even secondary ones, are well-drawn. The dialog keeps the action moving, especially the banter between Ella and Bailey. Middle-schoolers will relate to Ella’s conflict over Z, her tender feelings for Bailey and her self-sabotaging doubts. In a satisfyingly realistic ending, Z will finally get the help he needs and Ella decides to come out of hiding to face the world.